Order of the Badge of Honour

It was established on November 1935, and was conferred on citizens of the USSR for outstanding achievements in production, scientific research and social, cultural and other forms of social activity. 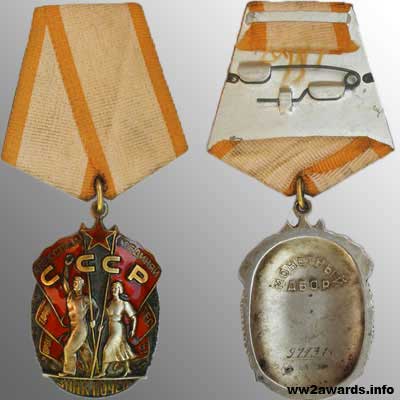 History Order of the Badge of Honour

By 1935 in the award system of the Soviet Union, there were two orders for «peaceful» merits; this is the highest order of Lenin and Order of the Red Banner of Labor. Mass awarding of these awards, led to a decrease in their importance, the result was the creation of a new award, for high performance in labor, cultural, scientific and sporting activities, and this award was the Order of the Badge of Honor.

The award was established on November 25, 1935, by the resolution of the Central Executive Committee of the USSR, with changes and amendments introduced on June 19, 1943, and March 28, 1980, and at the time of its creation, took the last, lowest place among the USSR orders.

The design of the sign was developed by the artist Galyadkin D.S., and according to the idea of the author, the worker and collective farmer, depicted in the center of the order, symbolized the movement forward towards a bright socialist future.

List of recipients Order of the Badge of Honour

The first decree on awarding was issued on November 26, 1935. The first cavaliers were 13 participants of the Red Army Song and Dance Ensemble of CDKA. MV Frunze for «the exceptional merits of the ensemble in the matter of the cultural service of the Red Army men and commanders, workers and collective farmers».

The second decree on awarding dated back to December 3, 1935. 20 workers of the Panteleymonovsky plant named after Karl Marx were awarded, who made a 25-day hiking campaign, on the route Stalino (since 1961, Donetsk, Ukraine) - Moscow. Note also that the purpose of the campaign was «propaganda among workers of the objectives and means of chemical defense», and the participants in gas masks overcame the route of 1200 kilometers long.

The badge of the Order of Honor No. 1 presented to Artykbay Tillyabayev, chair of the Batyr collective farm of the Yangi-Yul district of the Tashkent region of the Uzbek SSR, for «labor heroism and success in raising yields for cotton».

Only for the period 1935 to 1941, the Order of the Badge of Honor were awarded to 14500 people, and during the Great Patriotic War, in the period 1941-1945. another 66000 people. Among the awardees, the outstanding aircraft designer Andrei Nikolayevich Tupolev, the designers of the legendary Katyusha Dedov and Butorin, the engineer of small arms Goryunov.

The last Knights of the Order of the Badge of Honor were the citizens of Poland, who were awarded for «active participation in the creation of the book of Memory», dedicated to the soldiers of the USSR who died during the liberation of the Polish Republic from fascist invaders. Decree on awarding of December 23, 1988.

The first decree on awarding the Order of «Honor» dates back to December 29, 1988. The first knight was the Estonian composer and conductor, the author of the national anthem of the Estonian SSR, Gustav Gustavovich Ernesaks.

The last decree on awarding was issued on December 21, 1991. Knight of the Order of Honor was the director of the Belgorod cement plant of the Russian state concern «Cement» Anatoly Yakovlevich Litvin.

Since the statute of the order provides for repeated awards of the order, when the norms of the statute are complied with, there are a number of multiple holders of the Order of the Badge of Honor. The largest known number of awards for one person is five. This person is Bi Masturi Avezova, chairman of the Leninabad regional executive committee of the Tajik SSR.

In addition, four people are four-time cavaliers. This is Nikolai G. Gritsevich - First Deputy Chairman of the Omsk City Executive Committee, Halima Nasyrova – People’s Artist of the USSR, Mukum Sultanov – People’s Commissar of Local Industry of the Tajik SSR, Semen A. Chesnokov - Minister of Health of the Kazakh SSR.

In total, during its existence, the order of «Badge of Honor» and «Honor» was made about 1580850 awards.

Order of Honour in the award system of the USSR

Prices for Order of the Badge of Honour

Varieties of the Order of the Badge of Honour 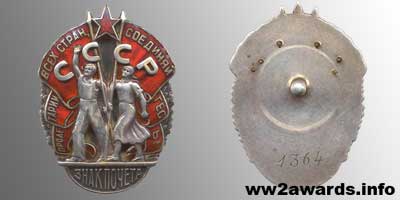 The award is made of six separate parts. The first and second, respectively, are the obverse and reverse of the order, fastened by soldering, and the four letters of the USSR, attached to the order with rivets, while the external letters C and P have two rivets and one each for the inner СС.

The reverse of the award is smooth, with a threaded screw 3 mm in diameter in the center. The order number is located below the screw and is made by hand with a engraver. 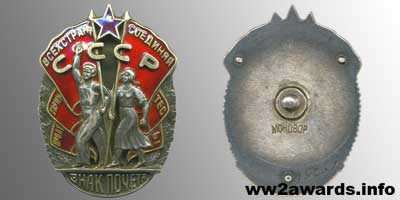 In 1936, the size of the sign was changed so that it did not seem too tiny in comparison with other USSR orders. In addition, the design of the order itself has changed. It was still created from six separate parts, but now the obverse and the reverse were fastened together by means of three rivets and the letters of the USSR were joined by soldering.

On the reverse of the Order, three rivets connecting the front and the back are now visible. The first variants of the order (numbers ≈ 2150-4000) were executed without stamp. Later versions have the stamp «МОНДВОР» (MINT) (numbers ≈ 4000-15600) made with a stamp below the rifled screw or the stamp «МОНЕТНЫЙ ДВОР» (COIN YARD) (numbers ≈ 15700-32490) which can be either above or below the screw. The order number can be located both between the stamp and the bottom rivet and in the lower part of the order to the right of the bottom rivet. 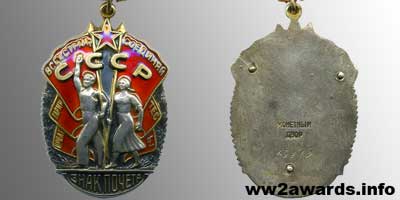 The third type of order appeared after the decree of June 19, 1943, prescribing wearing an oval order on the left side of the chest, on a pentagonal block. The Order lost the screw on the reverse and acquired the tab in the upper part, through which it was attached to a pentagonal block, covered with silk moire ribbon. The ribbon of the order is light pink in color, 24 mm wide, with two orange stripes 3.5 mm wide at the edges.

In addition, the order lost its cutout on the front side, between two flagpoles, through which the reverse side of the order was visible in the previous versions. There is also a small batch of orders (numbers ≈ 115800-125800), which have an additional, fourth rivet on this place, on the reverse side. 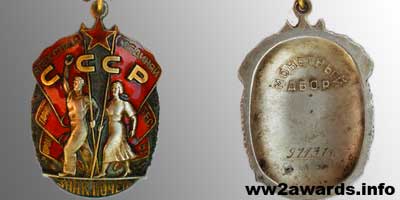 The fourth type of the Order of the Badge of Honor is the most massive, and less other valued by collectors. A distinctive feature of it is that the obverse and reverse of the award were made in the form of one piece, and in later versions (numbers ≈857000-1573447), and the letters of the USSR began to be made together with the sign, and not fixed by soldering.

On the reverse, the order acquired a pronounced deepening, an oval shape. The stamp «МОНЕТНЫЙ ДВОР» has moved to the top and is made in convex letters. In this case the word «МОНЕТНЫЙ» is arched, repeating the oval of the groove, and the word «ДВОР» is written horizontally. The order number was placed in the lower part of the oval recess and can be made both with a engraver and a drill. In addition, part of the number of orders has an underscore. 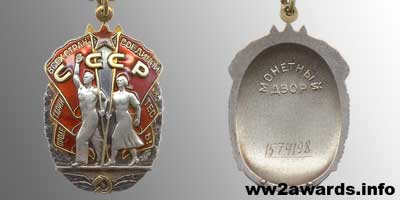 Outwardly, the award almost completely repeated the previous one. The difference was that, from the bottom of the award, the inscription «ЗНАК ПОЧЕТА» disappeared, which was replaced by a gilt hammer and sickle, with laurel branches diverging from under them.

Structurally the sign was made of two parts, directly the sign of the order itself, and fastened to it with the help of two rivets of a sickle and a hammer, with divergent laurel branches.

Reverse of virtually repeated 4 type of the order of the, the only difference was in two rivets, the bottom, outside oval deepening.

Statute of the Order of the Badge of Honour

The Order of the Badge of Honor is awarded to:

The Order «Badge of Honor» can be awarded to persons who are not citizens of the USSR, as well as enterprises, institutions, organizations, settlements of foreign countries.

Awarding the order of the badge of Honor is made:

Order Badge of Honor is worn on the left side of the chest and in the presence of other orders is located after the Order of Friendship of Peoples.