The Order of Victory was the highest military decoration awarded for World War II service in the Soviet Union, and one of the rarest orders in the world. 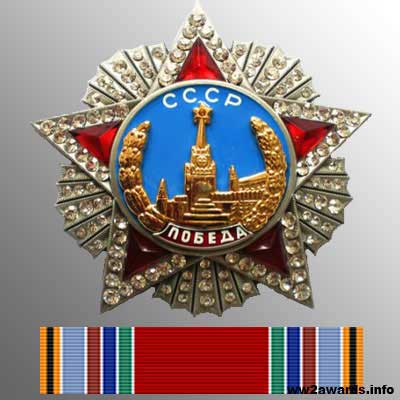 The order was awarded only to Generals and Marshals for successfully conducting combat operations involving one or more army groups and resulting in a «successful operation within the framework of one or several fronts resulting in a radical change of the situation in favor of the Red Army».

The order was officially adopted on November 8, 1943, and was first awarded to Georgy Zhukov (#1), Alexandr Vasilevsky (#2), and Joseph Stalin (#3). Like other orders awarded by Communist nations, the Order of Victory could be awarded more than once to the same individual. In total, the order was presented twenty times.

Order of Victory in the award system of the USSR

The highest military order, by its status is over any Soviet award.

higher
lower
no
all

After the victory at Kursk arc, Red Army launched a counter-offensive, from that moment the military initiative completely belonged to Soviet Union, final victory was a matter of time. During one of meetings in Kremlin, Stalin expressed the desire to create new awards that fully reflect spirit of the impending victory over Germany, outcome of this proposal was the appearance of the Order of Victory.

On October 25, 1943, artist A. I. Kuznetsov, who was already the designer of many Soviet orders, presented his first sketch to Stalin. The Supreme Commander did not approve the sketch of a round medallion with portraits of Lenin and Stalin. Instead, Stalin wanted a design with the Spasskaya Tower in the centre. Kuznetsov returned four days later with several new sketches, of which Stalin chose one entitled "Victory". He asked Kuznetsov to slightly alter the design, and on November 5 a prototype was finally approved.

The Order is made out of platinum in the form of a pentangular star with rays between the arms, measuring 72 mm in diameter. The star is studded with 174 diamonds weighing a total of 16 carats (3.2 g), while the arms of the star are made out of ruby. The rubies in the arms are synthetic, not because the synthetic gems were cheaper, but because they had to be of a uniform color, which could not be guaranteed with natural stones. In the center of the star is a silver medallion, with the Moscow Kremlin wall, the Spasskaya Tower, and Lenin's Mausoleum depicted in gold surrounded by bands of laurel and oak also colored in gold. The laurel and oak are bound with a red banner. The sky in the background is inlaid with blue enamel. Against the sky, the letters "СССР" (USSR) appear in gold centered on the top of the medallion, while the word "Победа" (Victory) is displayed on the red banner at the bottom.

The estimated value of the Order of Victory among collectors is more than ten million euros.