Order of Friendship of Peoples

The Order of Friendship of Peoples was an order of the Soviet Union, and was awarded to persons (including non-citizens), organizations, enterprises, military units, as well as administrative subdivisions of the USSR for accomplishments in strengthening of inter-ethnic and international friendship and cooperation, for economical, political, scientific, military, and cultural development of the Soviet Union. 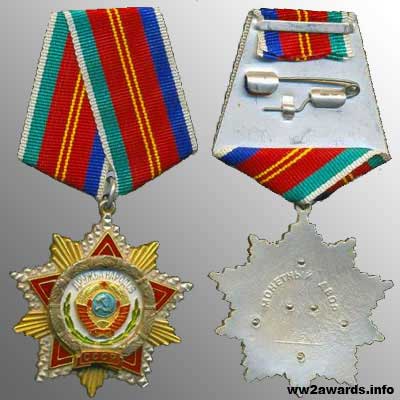 Prices for Order of Friendship of Peoples

The first awarding took place two weeks after the establishment of the order, 53 associations were awarded, among which are all 15 union republics, as well as autonomous republics, regions and national districts. Order of Friendship of Peoples under number 1 was granted to the RSFSR, No. 2 of the Ukrainian SSR.

The first individuals awarded with the Order of Friendship of Peoples were 193 employees of Aeroflot, who received the award on 9.02.1973.

The first foreign citizen who became a Knight of the Order of Friendship of Peoples was Nguyen Thi Dinh, Foreign Minister of South Vietnam.

In the history there were 6 cases of re-awarding citizens with this award. Enterprises, institutions, organizations and administrative territorial units were not rewarded again.

In total, 72,761 awards were awarded during the time of its existence.

Description Orders of Friendship of Peoples

The award is made of silver and is made in the form of a five-pointed gilded star, covered with ruby red enamel, with a silver edging. From under the star in the intersections, there are five bundles of five golden rays.

The center of the star is decorated with the gilded coat of arms of the Soviet Union, which is covered with colored enamel. Around the coat of arms is a white rim, with laurel branches in the lower part and the inscription «ДРУЖБА НАРОДОВ» (FRIENDSHIP OF PEOPLES) on the upper edge. The external overhead silver rim is made with relief images of handshakes, the lower part of the rim is intersected by a gilded ribbon covered with ruby red enamel and a gilded inscription of the «СССР» (USSR).

The reverse of the award is flat, with a mint stamp and number.

The order with the ear and ring is attached to a pentagonal block covered with a silk moire band 24 mm wide. The center of the tape is red, 13 mm wide, with two longitudinal yellow lines 1 mm wide. To the right of the red strip is green, and on the left is a blue strip 4 mm wide. Next is a white strip 1.5 mm wide.