Order of the Red Star

The Order of the Red Star - a reward for significant achievements in the defense of the Soviet Union, both in military and in peacetime, at one time became the second exclusively combat order of the USSR. 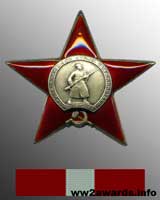 History Order of the Red Star

This order established in 1930, simultaneously with the Order of Lenin, and became the second most important military award of the USSR. The author of the design order is the artist V.Kupriyanov and sculptor V. Golenetsky.

The award is made in the form of a five-pointed star covered with ruby red enamel. In the center of the star, there is a shield with a picture of a Red Army man with a rifle in his hands, an inscription «ПРОЛЕТАРИИ ВСЕХ СТРАН СОЕДИНЯЙТЕСЬ» (PROLETARIES OF ALL COUNTRIES UNITE) around the shield, at the bottom there is the inscription «СССР» (USSR), under the shield image of a sickle and a hammer.

The Order of the Red Star is unique in that it is in fact the only Soviet order of the pre-war period, the design of which has not undergone any significant changes. The most significant change is the change in the position of the Red Army man on the central medallion. In the mid-thirties, the military regulations of the Red Army changed, and the soldier’s stand changed during the bayonet attack, which changed the stand of the soldier on the order.

Initially, the Order of the Red Star worn on the left side of the chest, and from June 1943 on the right, after the Order of the Patriotic War II degree. In addition, since 1943, instead of the Order, it allowed wearing an award ribbon on the award bar. The ribbon of the order is silk, moire, bordeaux, 24 mm wide with a gray strip 5 mm wide in the center.

The first awarded was Vasily Konstantinovich Blucher for the skillful reflection of the Chinese army’s blow during the events at the Chinese Eastern Railway.

Among the first Cavaliers of the Order of the Red Star was test pilot Kozlov IF. He awarded May 20, 1932, for the successful landing of an experimental I-12 fighter (ANT-23), which because of testing, severed the air gun and damaged the control system.

In the 1930s, the Order often awarded for merits not directly related to fighting clashes. For example, on July 7, 1933, the Order of the Red Star awarded to Mandrik Pyotr Vasilievich, chief of the central hospital of the People’s Commissariat «for Excellence in organizing exemplary medical treatment in the central hospital and for direct outstanding work in surgical treatment».

In addition, there were cases of awarding the Order of persons, generally far from military affairs. Thus, on March 22, 1935, Chief of the main Department of the gold industry A.P. Serebrovsky, «for over fulfilment of the production program of 1934».

The Order awarded not only to individuals, but also to entire collectives. Thus, one of the first collectives awarded the Order of the Red Star, on December 27, 1933, was the newspaper Krasnaya Zvezda – «for success in providing military and political training for the Soviet Army».

One of the first, awarded during the World War II was Belovol DA, for shot down in battle 3 fascist aircraft.

In total during the Second World War, approximately 2,660,000 awards made.

After the end of the Second World War, the importance of the Order significantly decreased, since beginning in 1944 they were awarded for long service (15 years of impeccable service). This rule abolished only in 1958, to raise the prestige of the award.

In the course of local conflicts after the war period and the War in Afghanistan, the Red Star Order awarded to all service men of the Soviet Army, who received moderate wounds, severe wounds or heavy concussions in battle.

Since the statute of the order provided for repeated awards for new feats and distinctions, as well as for long service, there are multiple holders of the Order of the Red Star.

The maximum number of awards by the Order of the Red Star of one person is six. We know for such people: Onoprienko Philip Petrovich, Panchenko Peter Petrovich, Silantev Vasily Vasilyevich and Sittseva Nikolai Gavrilovich.

The last decree on awarding dated from December 19, 1991. Knights of the Order of the Red Star were Permyakov Gennady Anatolyevich; Petrenko Alexander Pavlovich; Shamanov Vladimir Mikhailovich; Lyakh Vladimir Viktorovich «for courage and bravery shown in the performance of military duty».

Prices for Order of the Red Star

Varieties of the Order of the Red Star 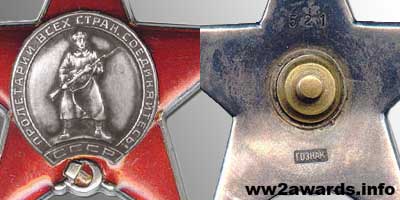 The first samples of the award, which awarded in 1930-1936, produced in the factory Goznak in the number of 800 copies. Its distinctive feature is that the star is hollow, made of two separate parts, connected by soldering. The third element of the order is a central medallion with a Red Army man and inscriptions attached to the front with soldering. The Red Army soldier in a greatcoat and budyonovka, with a rifle in his hands, and in boots with windings, is depicted facing a spectator that is exactly the way a soldier stood during the time of establishment (1930) during a bayonet attack.

On the reverse of the order, a bronze threaded screw with a two-stage flange. The «ГОЗНАК» (GOZNAK - State sign) stamp is located below the rifled screw, and the order number is higher than the screw. The nut for fastening the Order to clothing with a diameter of 36 mm, with a threaded flange soldered from the inside. 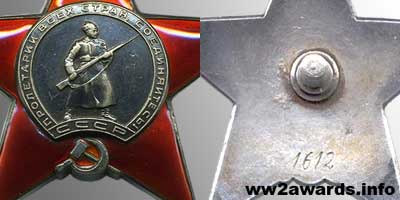 In the mid-thirties, the charter of the Red Army changed, and the soldier’s position during the bayonet attack became different, this required changes in the award itself. On the new versions of the Order of the Red Star, the soldier was already at an angle, except for this; soldiers shoes replaced, shoe with windings changed to boots.

The Star of the Order began to be made in one piece, with a shield with a Red Army soldier fixed with soldering. The reverse of the order is smooth, with a rifled screw in the center. The order number carried out manually, with an engraver and is located below the rifled screw. The clamping nut has become smaller in diameter -33 mm, against 36 mm in the previous type. 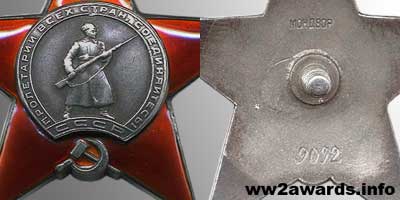 The third type of award appeared in 1937 and manufactured before the Great Patriotic War. The obverse of the award has not changed. The only significant change on the reverse is the stamp «МОНДВОР» (MINT), made by stamping and located above the rifled screw. In addition, in the rooms 1700-2100, there are transitional variants, on which the stamp «МОНДВОР» is made by graver by hand. 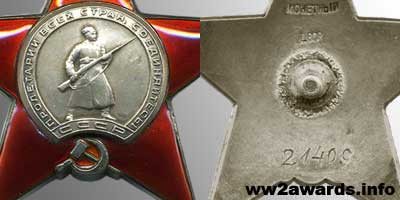 The fourth type of the Order of the Red Star made from 1938 to 1943. Compared with the previous, the third type, the stamp changed, and the word «МОНДВОР» (MINT) replaced by «МОНЕТНЫЙ ДВОР» (COIN YARD). The stamp, as before, is located above the rifled screw and can be located both at the base of the upper beam, and directly on the upper ray of the star.

From all subsequent options, this type is easily distinguished by the presence of a flange, at the base of the threaded screw. 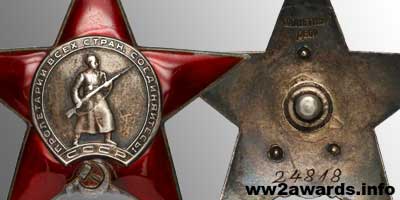 The fifth type of the Order of the Red Star made in the first year of the war after the evacuation of the Leningrad Mint to Krasnokamsk. Its main difference was that the central medallion with the Red Army man and inscriptions fastened not by soldering, but by means of three rivets. The rivets are visible on the reverse, for 12, 5 and 7 hours around the screw. The stamp «МОНЕТНЫЙ ДВОР» (COIN YARD) is located on the upper ray of the star in two lines. The number, as before, is located at the bottom, below the rifled screw and rivets. 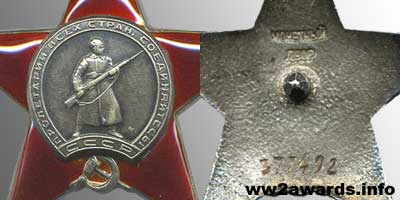 The sixth type of the Order of the Red Star became the most mass, and accordingly the least valuable among collectors. The main difference from the fourth type is the absence of a flange at the base of the threaded screw. The screw was made of silver of 925-th test, the diameter of the pin was 4 mm, the length was 11 mm (15 mm after 1951), attached to the order by soldering, in a specially drilled recess.

The clamping nut has a diameter of 33 mm and is made of silver at the early signs, or cupronickel/nickel silver at the signs released after February 1944. 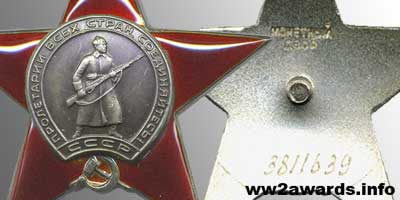 The last, the seventh type of the Order of the Red Star appeared in 1952. Its distinctive feature was a new medallion stamp. In the new stamp, the Red Army soldier points his bayonet between the letters «O» and «E» in the word «СОЕДИНЯЙТЕСЬ». In all previous versions, the point of the bayonet pointed to the letter «O». In addition, the figure of the Red Army soldier himself changed insignificantly, he is slightly tilted forward, and his right leg is turned to the right.

On the reverse, as in the earlier versions, the stamp «МОНЕТНЫЙ ДВОР» is located in two lines, at the base of the star’s upper beam. The number of the medallion applied in the lower part of the graver until 1968, and the boron machine was in the period from 1968 to 1991.

Statute of the Order of the Red Star

The Order of the Red Star established for rewarding for great services in the defense of the USSR both in military and in peacetime, in ensuring state security.

The Order of the Red Star is awarded:

The Order of the Red Star can be awarded to servicemen of foreign countries.

Awarding the Order of the Red Star is made:

The Order of the Red Star is worn on the right side of the chest and in the presence of other orders is located after the Order of the Patriotic War II class.