The Order of Lenin named after the leader of the Russian October Revolution, was the highest civilian decoration bestowed by the Soviet Union. 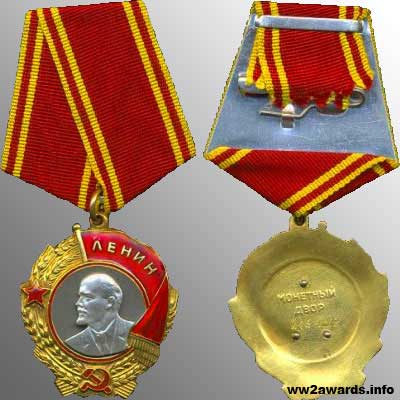 By 1930, the Soviet Union awarded only two orders, it was the Order of Red Banner and Red Banner of Labor, and this led to a large number of awards of these orders. As early as 1926, the idea of a higher award proposed, which then called the «Order of Ilyich». The project was in limbo for 4 years, until in the beginning of 1930 it decided to create another higher award - the Order of Lenin.

Lenin`s bas-relief created from a photograph of Victor Bulla in 1921, from the Third Congress of the Comintern. The creation of the first version Order of Lenin worked artist Ivan Dubasov and sculptors Ivan Shadr and Peter Taezhny, the second version of order created by the medalist A. Vasyutinsky.

First during the World War 2, of order of Lenin were awarded soldiers 98 th Frontier Detachment Babenko F. T. and lieutenant Gusev F. I.

Youngest knight of the Order of Lenin was Mamlakat Nakhangova, picking cotton from Tajikistan, who was 11 years old at the time of awarding.

Oldest knight was the Polish-Ukrainian composer S. F. Lyudkevich (23.01.1979). He awarded in connection with the 100th anniversary.

Before the establishment of medals, the Gold Star of the Hero of the USSR and the Sickle and the Hammer, together with the conferring of titles Hero of the Soviet Union and Hero of Socialist Labor, awarded the Order of Lenin. After the establishment of medals, this tradition did not break down, and the Order of Lenin automatically continued to be issued to all persons awarded the title of Hero, as well as cities and fortresses, which were appropriately named «Hero City» or «Hero Fortress».

After the collapse of the Soviet Union, there were two cases of awarding the Order of Lenin for merits committed before 1991. Taking into account these two awards, for the years of its existence the Order of Lenin 431418 awards produced.

There are only 51 known cases of deprivation of this award. Among those deprived: Nikolai Ezhov, Lavrentii Beria, Nikolai Shchelokov, Henry Jagoda, Nicolae Ceausescu.

Order of Lenin in the award system of the USSR

higher
lower
no
Order of the October Revolution »

Prices for Order of Lenin

Varieties of the Order of Lenin 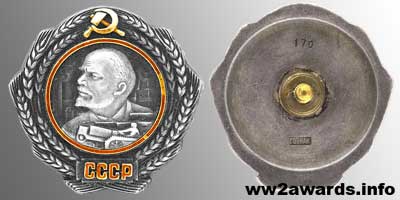 Order of Lenin - a portrait of a medallion depicting Vladimir Lenin against the background of factory pipes, under the portrait of the tractor with a tractor driver, a portrait placed in a golden circle filled with red enamel. Central medallion is framed with a wreath of wheat ears, the inscription «СССР» (USSR) under the medallion, at the top is a sickle and a hammer.

On the reverse Order, in the center is a bronze flange with a threaded screw. Above the screw, the order number is cut out by figures 1.5 mm high, below the screw is the stamp «ГОСЗНАК» (GOSZNAK). Obverse and reverse are two separate parts connected by soldering, inside the order is hollow. The clamping nut is made of silver, has a diameter of 32 mm, and on the inside is soldered bronze washer with thread.

Most of the orders first type later replaced, to newer types, with the preservation of the serial number, so there are awards of later types with numbers corresponding to the first type Order of Lenin. 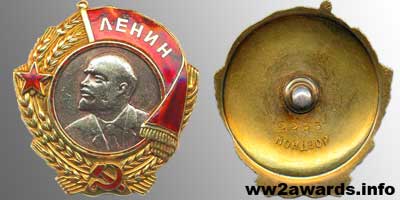 In 1932, the country`s leadership drew attention fact that the country`s highest state award lacks main symbols of the state, award was urgently redesigned. In the final version, the factory pipes and tractor removed from the background, on the left side of the wreath, a five-pointed star placed, and at the top right now was a red banner with the golden inscription «ЛЕНИН» (LENIN), sickle and hammer moved to bottom of the order. Material of order was gold, and on Central medallion of the order applied silver coating.

The sign became whole-stamped. In center of the obverse, is solder a silver threaded screw. Below the screw, order number knocked out, and beneath it a convex rounded inscription «МОНДВОР» (MONDVOR). The clamping nut is made of silver, and can have a diameter of 28-33mm.

In the early versions second type Order, silver cover was too thin and of poor quality, which gave birth to the myth of the existence of a type of order without a silver-covered central medallion, the so-called «Golden Head». This mistake, order without a silver central medallion, did not exist. In later versions order, the thickness and quality of silver coating medallion was increased, and this problem disappeared. 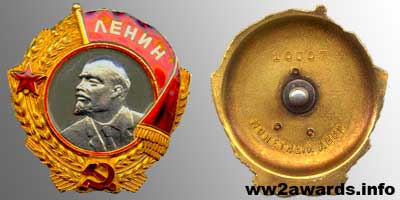 Main difference from previous type is that the bas-relief of Lenin made by a separate element of platinum, and attached to the order with the three rivets. The very surface of central medallion, instead of silvering, began to cover with gray-blue enamel.

On the reverse Order, you can see three rivets that hold the bas-relief. The order number is located above the screw, and can be, as it is beaten out, and applied with a pin. The stamp of the manufacturer «МОНДВОР» (MONDVOR), and in later versions, presumably after the evacuation of the Mint from Leningrad to Krasnokamsk «МОНЕТНЫЙ ДВОР» (MINT). 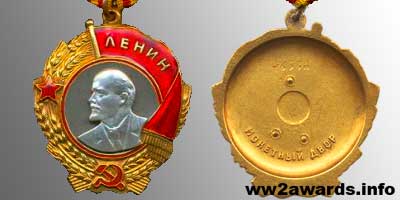 The appearance fourth type, associated with the decree of June 19, 1943, according to which the orders having an oval or round shape, prescribed to be worn on the left side chest on a pentagonal block with silk moire ribbon. As a result, the Order of Lenin received upper part of the ear for fastening to block, and accordingly lost screw on the reverse.

Some of the orders already made, altered for wearing on the block. Screw removed from reverse of the sign, and with the help of soldering a ring added, in the collectors this variant called the «swallowtail». In addition, early variants of the fourth type, have a round notch on the reverse, in the place where the screw was located, in later versions, it is absent.

Stamp of the manufacturer on all orders of the fourth type «МОНЕТНЫЙ ДВОР» (MINT) in a semicircle at the bottom. A number of the Order of Lenin can be applied as a chisel, and knocked out with a punch. 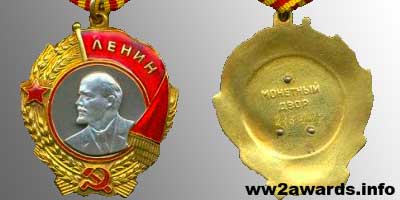 On reverse of order in the center appeared a deepened circular plane, with a diameter of more than 20 mm. Stamp of the manufacturer has moved to top. Possible options: above the upper rivet in a semicircle «ЛЕНИНГРАДСКИЙ» (LENINGRADSKY), below the upper rivet «МОНЕТНЫЙ ДВОР» (MINT) in two lines; or only «МОНЕТНЫЙ ДВОР» (MINT) in two lines, below the upper rivet. Number can be both knocked and stamped, and located both above and below the lower, two rivets, as are variants with number printed on bottom of the reverse, below round groove.

Statute of the Order of Lenin