Order of Alexander Nevsky - the lowest among the orders for awarding the commanders of the Red Army. Established by decree Presidium of the USSR Armed Forces on July 29, 1942 and named after the outstanding Russian Commander Alexander Nevsky. 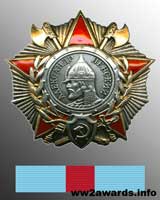 Alexander Nevsky - Prince of Novgorod, the Grand Duke of Kiev and Vladimir, became famous for his victory over the knights of the Livonian Order, whose decisive battle was the battle on Lake Peipsi, which went down in history as the Battle of the Ice.

The uniqueness of the award lies in the fact that it is the only order that existed in the award systems of Tsarist Russia, the USSR and modern Russia. When creating the order, the artists faced such a problem as the lack of an image of a great commander. When working, the artist I.S. Telyatnikov used images of the artist Nikolai Cherkasov, who played the role of the commander in the movie «Alexander Nevsky».

The Order of Alexander Nevsky is a five-pointed star covered with red enamel against a background of silver rays, two crossed axes under it, on top of the star is covered with a round shield image of Alexander Nevsky; the shield itself is framed with a laurel wreath. At the bottom of the award is an image of a sickle and hammer against a small shield, under it a crossed sword, a spear bow and a quiver of arrows.

The badge of the Order of Alexander Nevsky is made of silver. Silver content in the order is 37.056 ± 1.387 g. The total weight of the order is 40.8 ± 1.7 g. The size of the order between the end of the red star and the opposite apex of the ten-pointed figure is 50 mm. The distance from the center of the order to the top of any of the enamel rays of the five-pointed star is 26-27 mm.

The first award ceremony took place in November 1942, the first holder of the Order of Alexander Nevsky was Ivan Nazarovich Ruban, for the fact that the forces of the entire battalion of the marines were able to repel the offensive of the enemy regiment.

Women officers were also awarded the Order of Alexander Nevsky, among them, one of the most famous — the squadron commander of the 46th Guards, Taman, Orders of the Red Banner and Suvorov III degree, air regiment of night bombers — Guard Captain (later major) Maria Smirnova.

It is worth noting that most of the awards of the Order of Alexander Nevsky made to officers in status from platoon commanders to battalion commanders. Commanders from regiments to divisions extremely rarely awarded with this order; more often, they awarded higher status by orders of Suvorov and Kutuzov.

Although the order is considered an officer, there have been cases of awarding those sergeants and foreman. Since the statute of the award provides for the award of commanders of companies and platoons, and in the conditions of hostilities, after the death of the commander, often the command of the unit handled by a military who did not have an officer’s rank.

There are two triple holders of the Order of Alexander Nevsky, this is Ivan Grigorievich Borisenko and Nikolai Leontyevich Nevsky.

In total, during the Second World War, 42,165 awards held by the Order of Alexander Nevsky.

Order of Alexander Nevsky in the award system of the USSR

Prices for Order of Alexander Nevsky

Varieties of the Order of Alexander Nevsky 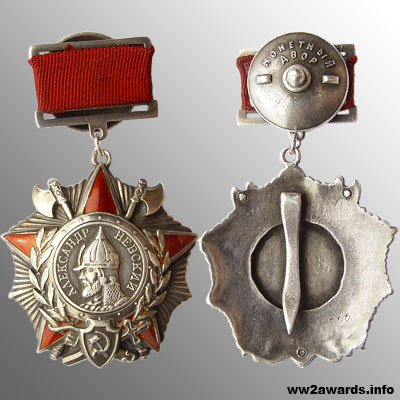 Since its establishment, the produced suspended version of the order, consisting of three separate parts. The first is a silver ten-pointed star, in the form of diverging rays; the second is a five-pointed star, covered with red enamel, with two axes, a sword, a bow, arrows, a figured shield and laurel branches; the third is a silver medallion with the image of Alexander Nevsky. The first and second parts of the order combined with the help of three rivets, which are visible on the reverse at one, six and 11 o’clock. The third part of the order, in the earlier versions (numbers 1-370), was fastened with the help of two rivets, and in later versions, with the help of soldering.

On the top ray of the star, the sign has an eyelet through which a ring is threaded, connecting the order with a rectangular block covered with a red ribbon. The size of the ribbon block is 29.5 by 20 mm. On the back of the block, there is a threaded screw, and a nut for attaching the order to the clothes. The nut is round, with a diameter of 25 mm, with convex letters «МОНЕТНЫЙ ДВОР» (COIN YARD).

On the reverse of the mark, the first part of the order is the ten end star, has a hole with a diameter of 21 mm, through which two rivets are visible on the early signs (numbers 1-370), holding the central medallion. In addition, early signs (numbers 1-3200) have a soldered vertical pin, for additional attachment of the sign to clothing. The stamp COIN YARD on the sign is missing; the order number is stamped with an engraver, to the right of the lower rivet. 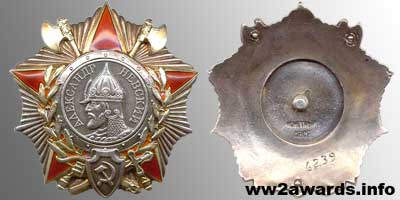 The appearance of the second type of order is connected with the Decree of June 19, 1943, according to which the order of Alexander Nevsky was now worn on the right side, on a threaded screw. In addition, instead of the order, it allowed to wear a ribbon on the award plate. The ribbon of the Order is blue, 24 mm wide, with a red stripe 5 mm wide in the center.

At the time the decree issued, the coin yard, which produced the order, had a significant supply of order to be worn on the ribbon block. All of them converted to be worn on the screw, while maintaining the serial number of the award. As a result, the numbers of the first and second types of order are largely intersected.

The Order itself lost the eyelet soldered to the upper beam of the star and received a rifled screw in the center. In the rest of the, order as before, was made of three parts, the first and second of which were fastened with rivets, and the third, the medallion with the image of Alexander Nevsky, was fastened with the help of soldering. The stamp «МОНЕТНЫЙ ДВОР» (COIN YARD) was applied in two lines; it can be seen on the reverse of the order in the central hole. An engraver just to the right of the lower rivet, as before, applies the number of the order. 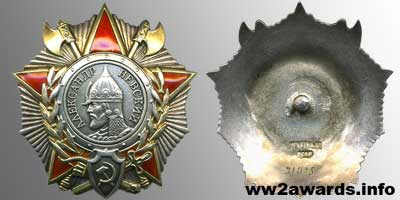 On the third type of order, the manufacturing technology changed. The sign was made of two parts: the first is a star with all the details, and the second is the central medallion with the image of Alexander Nevsky.

The first and second parts were connected by soldering, because of the rivet and the central hole on the reverse, there are no. The «МОНЕТНЫЙ ДВОР» (COIN YARD) stamp is marked below the threaded screw in two lines. The order number is now applied in the center of the lower part of the order, below the stamp.

Statute of the Order of Alexander Nevsky

The order of Alexander Nevsky awarded to the commanders of the Red Army, who showed personal courage, bravery and skilful command in the battles for the Motherland during the Patriotic War and ensured successful actions of their units.

Awarding the order of Alexander Nevsky made by decree of the Presidium of the Supreme Soviet of the USSR.

The order of Alexander Nevsky awarded to the commanders of divisions, brigades, regiments, battalions, companies and platoons:

The Order of Alexander Nevsky is worn on the right side of the chest and is located after the Order of Bohdan Khmelnytsky, III class.