The Order of Bohdan Khmelnitsky was a Soviet award named after Bohdan Khmelnytsky, Hetman (leader) of the Ukrainian Cossack Hetmanate The award was first established on October 10, 1943, by the Presidium of Supreme Soviet of the USSR during World War II. 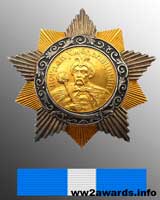 Prices for Order of Bohdan Khmelnitsky

Order of Bohdan Khmelnitsky in the award system of the USSR 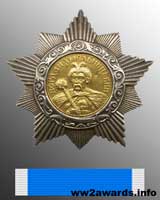 The award was first established on October 10, 1943, by the Presidium of Supreme Soviet of the USSR during World War II. The Order of Bohdan Khmelnitsky was broken down into three different classes: 1st class, 2nd class and 3rd class. General Alexey Danilov became the first recipient of the 1st class Order of Bogdan Khmelnitsky, for the liberation of the city of Zaporozhye. A total of 8451 awards were given, of which 1 class - 323, 2 class - 2390, 3 class - 5738. 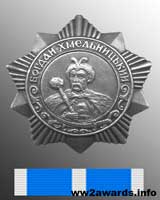 The General Nikita Khrushchev, the Soviet filmmaker Alexander Dovzhenko, and poet Mykola Bazhan initiated the idea to create this award. The order was created during World War II and was awarded to Soviet Armed Forces personnel and often the members of the Ukrainian Front for their exceptional duty in combat operations that led to the liberation of Soviet territory.

This order became the only one in red army reward system, in which the inscription was not made in Russian (inscriptions are made in Ukrainian), but also was the only order that guerrillas could be awarded. Also, this order became the only one that did not have a variant on the suspension bar, but was always made with a threaded screw. In addition, this was the first military order, the third degree of which could have been obtained by the soldier and sergeant of the USSR army. And also the first order in the statute of which was mentioned by officers of the Navy.

The Order of Bogdan Khmelnytsky is a five-pointed star, made in the form of diverging rays, in the center a shield with the image of Bogdan Khmelnitsky, under star divergent silver rays.

Zynoviy Bohdan Khmelnytsky (1595-1657) was a Polish–Lithuanian-born Hetman of the Zaporozhian Host of the Crown of the Kingdom of Poland in the Polish–Lithuanian Commonwealth (now part of Ukraine). He led an uprising against the Commonwealth and its magnates (1648–1654) that resulted in the creation of a state led by the Cossacks of Ukraine.