Order of the Patriotic War

The Order of the Patriotic War is a Soviet military decoration that was awarded to all soldiers in the Soviet armed forces, security troops, and to partisans for heroic deeds during the German-Soviet War, known by the former Soviet Union as the Great Patriotic War. 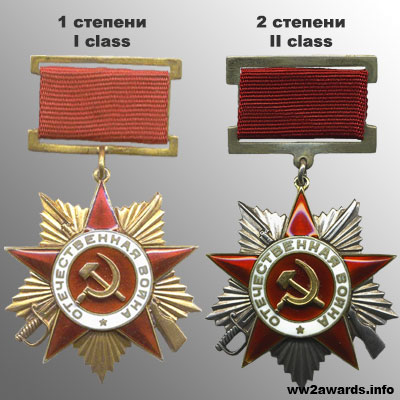 History Order of the Patriotic War

By beginning of the Great Patriotic War, the USSR award system numbered 6 awards, but in fierce battles feats and other heroic actions were massively carried out. In addition, statute of existing awards was very vague, and did not give clear explanations for any specific actions in the combat situation to reward fighters and commanders.

In April 1942, Joseph Stalin instructed the head of Main Directorate Red Army Logistics, General Khrulev, to develop a draft order for soldiers who especially distinguished themselves in the fight against the fascist invaders. Work on project, with working title of the Order «For Military Valor», were artists Sergey Dmitriev and Alexander Kuznetsov. After the presentation first awards projects, the order was renamed, and it received its final name «Order of the Patriotic War».

The Order was established on 20 May 1942 and came in first class and second-class depending upon the merit of the deed. It featured a red enamel five-pointed star, made of silver, with straight rays in the background, and crossed sabre and rifle. The rays in the background were golden for first Class and silver for second Class. The central disc had a golden hammer and sickle on a red enamel background, surrounded by a white enamel ring with the words «ОТЕЧЕСТВЕННАЯ ВОЙНА» (Patriotic War). Originally the Order was attached to a plain red ribbon much like the Gold Star award, but from June 1943 the Order was to be worn on the right chest without ribbon; on less formal occasions a ribbon bar, dark red with a bright red central stripe for the 1st Class, or dark red with bright red edge stripes for the 2nd Class, may be worn instead. The material for order of the Patriotic War 1st class was chosen gold, 2nd-silver.

To timely reward fighters and commanders who distinguished themselves in battles, the right to award over the Order of the Patriotic War was transferred to military command - from commanders of fronts and fleets to corps commanders inclusive. The awarding of orders often took place in a combat situation immediately after the performance of the feat.

The first awards took place in May 1942. Awarded were the artillerymen of the thirty-second regiment, who fought in the Kharkov direction. The calculation of Captain Ivan Cricle in two days of continuous combat could completely destroy 32 enemy tanks when part of the calculation was killed or seriously injured, Senior Sergeant Smirnov, continued to fire even after losing his hand. For their courage and heroism, as well as for implementation of norms of the statute, Cricle and Smirnov were awarded Order of the Patriotic War first class, the other fighters received orders of the second degree.

The Order of the Patriotic War of the 1st class under № 1 was received by the family of posthumously awarded Konyukhov Vasiliy Pavlovich, the senior political instructor, deputy chief of the political department of the 52nd Infantry Division, for showing courage and bravery in battles near Rzhev in 1942.

Order of the Patriotic War, 2nd class №1, was posthumously awarded Pavel Alekseevich Razhkin, a senior lieutenant, deputy chief of staff for for intelligence 155th Tank Brigade, who many times personally supervised the operations, sometimes reconnoitering a battle on tanks.

There were cases when the Order of the first class was awarded to all the soldiers who participated in the military operation, for the first time such honor was given to the sailors of the submarine K21, for the attack on the flagship`s battleship of the German fleet, Kirpitz.

Many Soviet soldiers and officers were awarded the Order of the Patriotic War more than once. The maximum known number of awards for one person by this order, for feats during the war years - five times. This cavalier Fedorov Ivan Evgrafovich, four Orders of the Patriotic War I class (3 combat and 1 anniversary) and one Order of the Order II class.

Also, many Orders of the Patriotic War were awarded to foreigners, mostly in the ranks of the Polish army, the French Normandy-Neman aviation regiment, the Czechoslovak corps, the crews of the Lend-Lease ships.

After the war, the Order of the Patriotic War was awarded to tens of thousands of wounded soldiers, who for whatever reason, did not receive the rewards to which they were presented during the fighting.

In 1985, in honor of the 40th anniversary of the Great Victory over Fascism, the Order of the Patriotic War all veterans of the war who lived at that time were awarded.

Prices for Order of the Patriotic War

Varieties of the Order of the Patriotic War I class 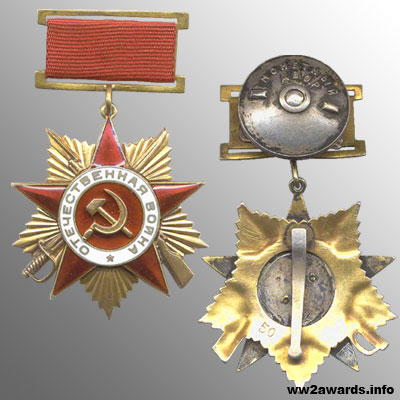 The first type of the Order of the Patriotic War was suspended, on a rectangular ribbon block, covered with a red moire ribbon and was made from its establishment on May 20, 1942.

All the signs of the first type were made at the Krasnokamsk Mint (KMD). Order consisted of four parts:
1) outer, silver five-pointed star with a circle in the center, covered with red and white enamel and the inscription «ОТЕЧЕСТВЕННАЯ ВОЙНА» (PATRIOTIC WAR) around the circle, was made of 925 silver;
2) inner gold star, made of 583 gold, in the form of divergent rays, with crossed sword and rifle;
3) golden hammer and sickle, imposed on the central part order;
4) a rectangular block, covered with a red ribbon with a threaded pin and a nut on the reverse side.

On the reverse of the inner golden star in the center is a round hole, with a diameter of 16.5 mm, through which two rivets are visible, fastening the golden hammer and sickle to the outer star. In addition, in the early versions of the Order, on the reverse golden star, a vertical pin can be soldered, for additional attachment to clothing, in later versions, there is no pin. Order number is stamped manually, on the inner star at 7 o'clock on the dial. The fastening of the order's badge to the block can be directly through the ring at the top of the sign and the bottom of the block, and with the use of an additional ring between them. 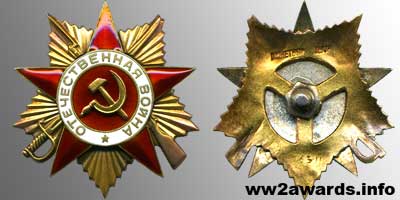 The appearance of the second type of order is associated with a decree of June 19, 1943, prescribing to wear all the orders in the form of a star, on the right side of the chest, on a threaded screw. As a result, the Order of the Patriotic War lost the ribbon block, and the ring on the upper ray of the star. On the reverse of the outer star, in the center, a threaded screw appeared, which was passed through the inner star, and with the help of a small nut, connected the two parts together.

The inner golden star, in the central hole, received three jumpers, joining in the center around the screw. In addition, in the upper part of the inner star there appeared the stamp «МОНЕТНЫЙ ДВОР» (MINT), in one or two lines. Occurring variants without stamp are the exception, caused by malfunctions in the technological process when making orders. The order number moved to the lower beam of the golden star, and was applied with a engraver. 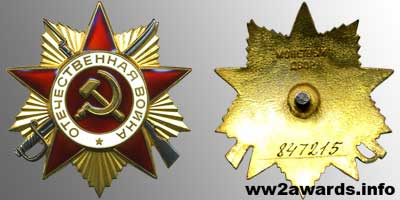 The appearance of the third type of order is connected with the Decree of the Presidium of the Supreme Soviet of the USSR of March 11, 1985, according to which in honor of the 40th anniversary of the Great Victory over Fascism, the Order of the Patriotic War all veterans of the war who lived at that time were awarded.

The third type of the order was completely made of 925 silver, in the form of a single-piece design, with no overlaid parts, with a gilded inner star, a sickle and a hammer. Unlike the second type, one of the gilded rays of the inner star comes under the hilt of the checkers. The reverse of the award was flat, with rough edges, a threaded screw and a 33 mm diameter nut. The stamp «МОНЕТНЫЙ ДВОР» (MINT) is located in the upper part of the order and is made in convex letters. Order number engraved boron car or engraver, has an underscore and is located below the rifled screw.

Moscow and Leningrad Mints, Russian Gems, Moscow, Bronnitsy and Tallinn Jewelry Plants were engaged in the manufacture of the orders of the Patriotic War of the 1st class of the third type.

Varieties of the Order of the Patriotic War II class 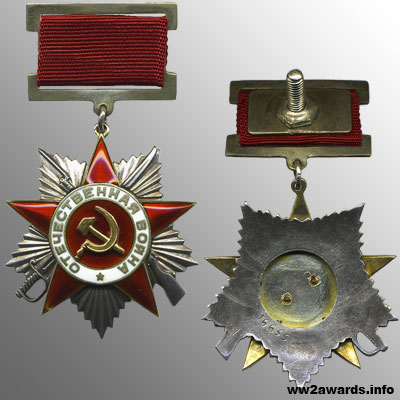 Similarly to the 1st class of the Order, the 1st type was made of four parts: the outer star; the inner star; a gold sickle and a hammer: ribbon block. Manufacturers were the Krasnokamsky Mint (КМД) and the Moscow Mint (ММД).

The difference from 1 class was that the inner star was made not from gold, but from silver of 925 tests. Most often, the inner and outer stars are connected by soldering, although Moscow Mint variants are encountered where the inner and outer star can be connected by means of rivets. Early versions of the order have a vertical pin on the reverse, for additional attachment to clothing. In addition, the first versions of the order were fastened directly to the ribbon block, through a ring extending from the upper beam, in later versions, an additional ring was inserted between the ribbon block and the order. 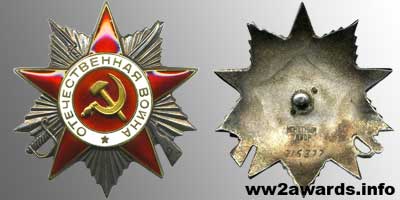 The second type of the Order of the Patriotic War appeared after the decree of June 19, 1943, according to which this award was now worn on the right side of the chest, on a screw fastening. The mark lost its ribbon block and eyelet on the upper ray, and also received a threaded screw on the reverse.

Signs of the second type were made of two parts, directly the sign itself, made of silver, in which now the inner and outer stars were made as a whole, and the gold sickle and hammer, fastened by means of two rivets.

Manufacture of orders of the second type was carried out: Krasnokamsky Mint; Leningrad Mint; Moscow Mint and Moscow plant «Platinapribor». As a result of the order of different manufacturers and different years, they have dozens of minor differences, on variants of execution of the reverse of the award, the imprinting of the mint and the order number. 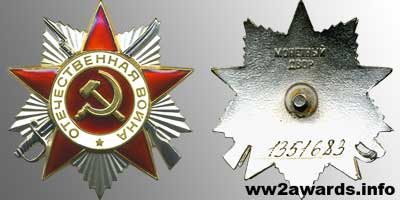 The third type of order was entirely made of silver, without overhead details, with a gold-plated sickle and hammer. The reverse of the award is flat, with rough edges, without rivets. Stamp is convex, located above the rifled screw, in two lines. The order number is located below the screw, engraved boron machine or engraver and underlined by one stripe.

Statute of the Order of the Patriotic War

Order of the Patriotic war I class is awarded

Order of the Patriotic war II class is awarded

Awarding of the Order of the Patriotic War can be repeated for new feats and distinctions.

Order of the Patriotic War I class worn awarded on the right side of the chest and is located after the Order of Alexander Nevsky.