The Order of Glory - established to reward ordinary soldiers and sergeants of the Soviet Army, as well as junior lieutenants of the USSR Air Force, was established on November 8, 1943. 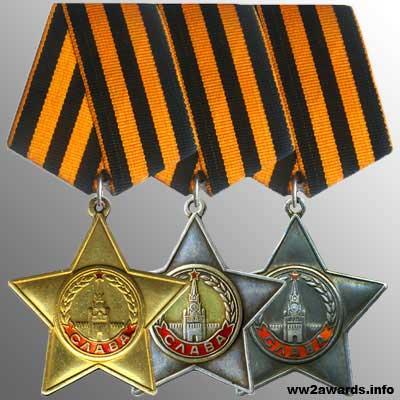 In November 1943, along with the Order of Victory, another award was established, the Order of Glory. In contrast to the general order of the Victory, this award was intended for privates and sergeants of the Red Army, as well as for the lieutenants of the USSR Air Force.

Work on the project order, with the working title of the Order of Bagration, began in August 1943. It was assumed that the order would have four classes and a ribbon of orange-black colors (color of flame and smoke). From 26 sketches provided to the chief of the Main Directorate of the Red Army Logistics, General Khrulev, he was selected four, which on October 2, 1943, were submitted to Stalin.

In the final version, Stalin chose the design Moskalev NI, and proposed to reduce the number of classes to three, by analogy with the orders of Suvorov and Kutuzov, while agreeing with the author`s proposal to use a tape similar to the St. George ribbon of pre-revolutionary Russia. In addition, adding that there is no victory without glory, Stalin proposed renaming the award to the Order of «Glory».

Order of Glory - a five-pointed star in the center of which is a circle with the image of the Spasskaya Tower of the Moscow Kremlin, in the lower part of the ribbon with the inscription «СЛАВА» (GLORY), along the edges of the circle is a laurel wreath, ribbon and star on the tower enameled with red enamel. Order with the help of a ring is attached to a pentagonal block, covered with a silk moire ribbon with three black and two orange stripes of equal width.

The Soviet Order of Glory is one of the unique orders in the history of the Soviet award system, first, it practically repeats the St. George cross on ideology, or as it was also called the «soldier George» of pre-revolutionary Russia. Seriously even considered the issue of legitimization of the St. George Cross and equating his knights to the Knights of the Order of Glory. Secondly, they were awarded exclusively sequentially from the third to the first classes. Thirdly, the award of all classes had the same ribbon. Fourthly, it was the only order awarded solely to soldiers and sergeants (in aviation to junior lieutenants).

In addition, the Order of Military Glory was one of the few Soviet orders to which only people were awarded. In history, only one award is known, which goes beyond this framework, after the successful storming of the fortifications of the enemy on the Vistula River, all soldiers and sergeants of the first battalion of the 215th Guards Regiment were awarded the Order of Glory, and after a while this award was received and the battalion, which from that moment became known as the battalion of Glory.

The first decree on awarding is dated November 13, 1943, Malyshev V.S. became the first gentleman of the Order of Glory of the III class. For the fact that during the battle he was able, to approach and destroy the enemy machine gun that prevented the offensive of the troops.

The first awarding of the Order of Glory II class was held on December 10, 1943. Cavaliers were the sappers of the 10th Army of the Western Front, soldiers Baranov S.I. and Vlasov A.G.

The first awarding of the Order of Glory 1st class was held on July 22, 1944. The first full cavaliers were the assistant platoon commander, senior Sergeant Shevchenko K.K. and sapper, Corporal Pitenin M.T.

Since the manufactured orders were sent to different parts of the front in parties, and there they were distributed among the headquarters of the military units that had the right to award this order, the order numbering had a wide range, and the order with a low number, by its date, could be issued later than the high order number.

Order of Glory 1st class, number 1, received the commander of the infantry division, Guard Sergeant Nikolai Zaletov (63rd Guards Rifle Division of the Leningrad Front), decree of the Presidium of the USSR Supreme Soviet on October 5, 1944.

The badge of the Order of Glory I class number 2 was received by a soldier of the same 63rd Guards Infantry Division, Sergeant Ivanov VS (Decree of the Presidium of the Supreme Soviet of the USSR of March 24, 1945).

In connection with the confusion introduced by the war in the documents, there are cases of re-awarding the order of the same class (most often the third), one person. For example, Khristenko Vasily Timofeevich was awarded the Order of Glory III class on February 22, 1944, and then again on November 4, 1944. Later, Vasily Timofeevich became a full knight of the Order of Glory (2nd class — January 24, 1945, and 1st class — May 15, 1946). Besides him, three more cavaliers of the Order of Glory of three classes had four awards each with an order. These cavaliers: Alimurat Gaibov, scout of the 128th Mountain and Rifle Division (two Orders of Glory II class); Vasily Naldin, gunner of the 1071 fighter antitank artillery regiment; Alexei Petrukovich, Sergeant major of the 35th Guards Rifle Division.

Cavalier of two St. George crosses, a soldier Kuzin S.T., fighting during the war in the ranks of the Red Army, became a knight of two Orders of Glory.

Order of Glory in the award system of the USSR

Prices for Order of Glory

Varieties of the Order of Glory I class 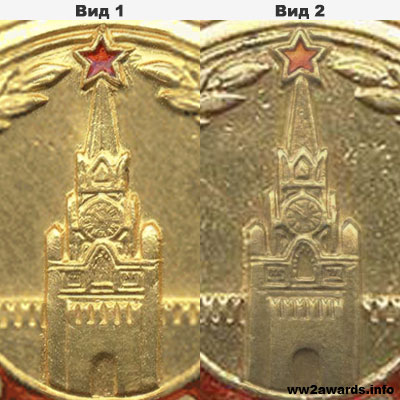 Collectors share two subspecies of this order. In earlier versions, the numbers 1-3000 digits of the dial on the chimes of the Moscow Kremlin relief, Roman.

A later version of the Order, numbers 3136-3776 differs in that on the dial the Roman numerals are replaced by abstract labels. In addition, later versions have a number of minor differences, so the star on the top of the sign, stopped touching the outer rim, and below it disappeared a groove, between the tower and the enameled tape.

Varieties of the Order of Glory II class 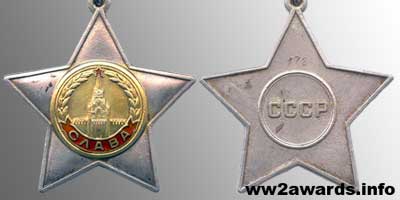 Orders of the second degree were made of silver, with the application of gilding on the central medallion.

The first variants of the Order have on the reverse, a border, 1 mm high along the contour of the star. The dial on the Spassky Tower of the Moscow Kremlin is made in Roman numerals; the clock indicates 11:52. 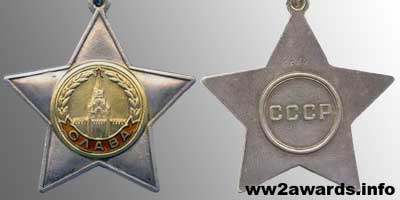 The second type of the Order of Glory 2 class differs from the first, the absence of a rim along the contour of the star on the reverse. 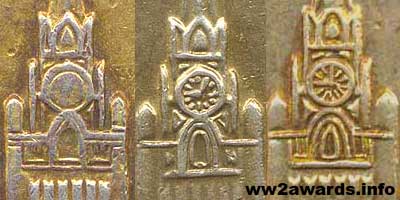 Varieties of the Order of Glory III class 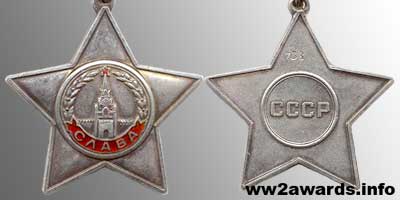 Order of Glory 3 class completely made of silver, with enamel coating stars and ribbons.

A distinctive feature of the first type also as of the second degree of the order is a 1 mm wide rim on the reverse along the star contour. The clock on the Spassky Tower shows 11:52. The numbers on the dial are convex, Roman. Serial number is printed manually. 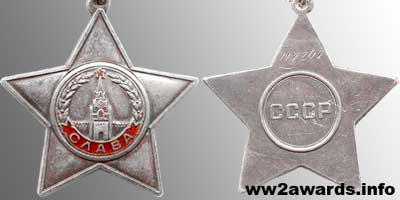 The second type of the Order of Glory III class is distinguished by the absence of a 1 mm wide rim along the contour of the star on the reverse.

All other details correspond to the order of the first type, the dial is also made with Roman numerals, and the clock indicates 11:52. 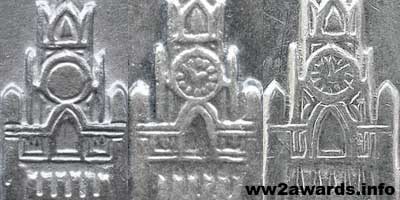 Statute of the Order of Glory

Order of Glory is awarded to privates and sergeants of the Red Army, and to aviation junior lieutenants, who displayed glorious feats of bravery, courage and fearlessness in combat for the Soviet Motherland.

The Order consists of three classes: I, II and III class. The highest degree of the Order of Glory is the I class. Rewarding is performed sequentially: first the third, then second and, finally, first class.

The Order of Glory is awarded for the fact that:

Awarding the Order of Glory made by the Decree of the Presidium of the Supreme Soviet of the USSR.

Awarded with the Orders of Glory of all three class are awarded the right to confer a military rank:

The Order of Glory was worn on the left side of the chest. In the presence of other USSR orders and medals, it was worn immediately after the Order of the Badge of Honor.