The Order of Nakhimov is a military decoration of the Soviet Union named in honour of Russian admiral Pavel Nakhimov and bestowed to naval officers for outstanding military leadership. 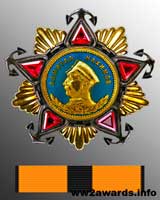 Prices for Order of Nakhimov

Order of Nakhimov in the award system of the USSR 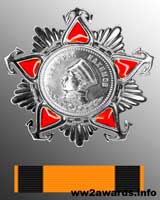 By 1944, in the award system of the USSR there were 4 awards bearing the names of the great Russian generals, but the navy wanted to have their own, exclusively naval awards created in honor of the great Russian naval commanders. So in March 1944 appeared 2 awards, the Order of Nakhimov and Ushakov.

When developing the statutes, the question arose, which of these orders should be higher in the table of ranks? The fact is that Soviet historians rarely mentioned Ushakov, about Pavel Nakhimov wrote much more, and he was well known to people as a hero of the Crimean war. But the People`s Commissar of the Navy, Admiral Kuznetsov, insisted that the order of Nakhimov be second in importance, and the first after all was the Order of Ushakov, since this admiral did not suffer a single defeat. As a result, Kuznetsov managed to persuade the commission to place the order of Nakhimov in second place.

According to its statute, the order corresponded to the army order Kutuzov. After giving the sketches of the orders to Stalin, at the request of the leader, the first degree was supplemented with five rubies, on the first orders natural, later synthetic, which made this order expensive at the cost of materials (except for the Order of Nakhimov, only the highest military order of the Victory was decorated with precious stones).

The Order of Nakhimov 1st class was of multi part construction consisting of a gold five pointed star displaying radiant rays, the bottom arm pointing straight down, a silver five pointed star with each arm ending in a naval sea anchor, its upper arm pointing straight up with the rays of the gold star protruding between its arms, a central gold medallion covered with dark enamel and the gold left profile relief image of the bust of admiral Nakhimov over two laurel branches at the center of the medallion, above the admiral`s head along the medallion`s upper circumference, the inscription in gilt letters «АДМИРАЛ НАХИМОВ» (ADMIRAL NAKHIMOV). The hammer and sickle bisected the laurel branches on the central medallion. Five triangular red rubies were affixed to the Silver Star, one on each arm pointing out from the central medallion`s outer edge. On the reverse of the silver star, a threaded screw and a 33 mm in diameter nut arrangement for attachment to clothing. The maker`s (mint) mark was located at the upper part of the gold star`s reverse, the award serial number was hand etched in the lower part. The Order of Nakhimov 2nd class was of two part construction and made entirely of silver with red enamel in lieu of rubies.