The Order of Suvorov is a Soviet military decoration that was reward senior army personnel for exceptional leadership in combat operations. 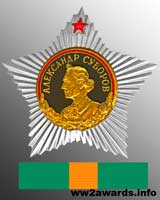 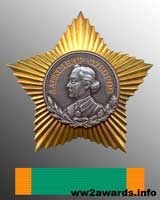 Prices for Order of Suvorov

The award was established on July 26, 1942, the first awarded order of Suvorov became Georgy Zhukov, the second Alexander Vasilevsky, the third Nikolai Voronov, all were awarded on January 28, 1943 for preparation and implementation of offensive operations against Wehrmacht troops.

Order of Suvorov in the award system of the USSR 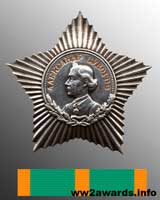 The Order of Suvorov became the first order in history of Soviet Union, which had three degrees, and took the highest step among orders, which awarded command of the Red Army. Simultaneously with it on June 29, 1942 two other, the younger order of Kutuzov and Alexander Nevsky were established.

The Order of Suvorov is a five-pointed star in the form of diverging rays, in the center is a circle with the image of Alexander Suvorov, lower part of circle is framed by a wreath of laurel and oak leaves, along the upper part of circle there is inscription «АЛЕКСАНДР СУВОРОВ» (ALEXANDER SUVOROV). The Order of the first class also distinguished presence of a red star on upper ray of star of the Order and a larger size. Material for production of the Order of Suvorov I class was chosen platinum, 2 - gold, 3 class was made of silver.

Alexander Vasilyevich Suvorov 13 November 1729 or 1730 – 6 May 1800 was a Russian military leader, considered a national hero. He was the Count of Rymnik, Count of the Holy Roman Empire, Prince of Italy, and the last Generalissimo of the Russian Empire. Becoming the General of the Infantry in 1786, he commanded in the Russo–Turkish War of 1787–1792 and won crushing victories at the Battle of Rymnik and Siege of Izmail. For his accomplishments, he was made a Count of both the Russian Empire and Holy Roman Empire. Suvorov put down a Polish uprising in 1794, defeating them at the Battle of Maciejowice and storming Warsaw. As commander of the Austro-Russian army, captured Milan, and drove the French out of Italy at the Battles of Cassano d'Adda, Trebbia, and Novi. Suvorov was made a Prince of Italy for his deeds. Suvorov is considered one of the greatest commanders in Russian history. He was awarded numerous medals, titles, and honors by Russia, as well as by other countries. Suvorov secured Russia's expanded borders, renewed military prestige, and left a legacy of theories on warfare.